The Criminal Law (Temporary Provisions) (Amendment) Bill was passed in Parliament on 6 February 2018. This is the 14th time that the Act has been renewed since 1955.

The key amendments clarified the existing position in the CLTPA, which has been accepted by the Courts, that the Minister’s decisions under Section 30(1) of the Act are final; introduced a new Fourth Schedule to clarify the finite scope of criminal activities which can be subject to the CLTPA, instead of leaving it open-ended as was the case before the amendments; and strengthened the administration of the Police Supervision Order regime.

In addition to the safeguards already in place, sitting Judges of the Supreme Court will chair the independent advisory committees (to which all orders made by the Minister under sections 30 and 32 are referred, as required by the CLTPA) from March 2018.

Find out more in the Note by SMS Indranee on the Criminal Law (Temporary Provisions) (Amendment) Bill. 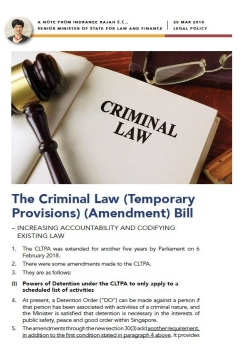