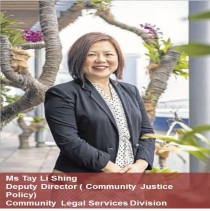 A CAREER in the public sector was not on the cards for Ms Tay Li Shing initially. After she graduated with a law degree from the University of Bristol, she did what most law graduates would do — look for a job in a law firm.

“I thought that joining a large law firm to do commercial litigation would be the best way to start a law career, and also to satisfy my parents’ expectations, having sent me overseas for a law degree,” she says.

Ms Tay practised law for a few years. As she wanted a new career that would allow her to contribute to the community, she quit the law firm and joined the then Ministry of Community Development, Youth and Sports (MCYS). There, she was involved in projects relating to youth and women — work that was “completely unrelated to law”.

Her family members were averse to this career switch, as they thought that she was throwing away her law degree to do something totally unrelated to what she studied.

From MCYS, her career path took her to the PS21 Office in the public service division of the Prime Minister’s Office. At PS21, she and her colleagues promoted the spirit of innovation and worked towards getting the public sector ready for the challenges of the 21st century.

In 2013, she was appointed the Head/Deputy Director for Community Justice Policy of the Community Legal Services Division.

“Joining the Ministry of Law felt like I have come full circle, as this is the first role that marries both my legal and government policy background,” she says.

Ms Tay has been serving in the public sector for 10 years now, and she describes it as “an eye-opening and largely fulfilling journey”.

She takes pride in playing a part in the recent launch of the enhanced Criminal Legal Aid Scheme (CLAS), where the Government made what she terms as “the significant philosophy shift”, to enable low-income accused persons facing criminal charges to have access to pro bono legal representation so that they do not have to face the criminal justice process on their own.

Ms Tay also finds satisfaction in knowing that her work is making people’s lives better. She says more needy accused persons are being helped by CLAS, neighbours with intractable disputes can now have them resolved at the new Community Disputes Resolution Tribunals, and the Law Society has the support to iron out operational issues for CLAS by facilitating negotiations with other government agencies.

To Ms Tay, a career in the public sector is for those wanting to contribute to the development of Singapore and the community, as it presents diverse opportunities through its Ministries and Statutory Boards. The scale of work is also often far-reaching.

In addition, she feels that the government-citizen partnership will only strengthen in the future, with the public wanting to be more involved in designing solutions that affect their lives. She calls this a positive development as it fosters greater ownership of the issues that are close to one’s heart, as opposed to relying on the Government to do something about them.

She also anticipates that the public sector, as an employer, would be more porous in the years ahead, with a greater diversity of officers entering the service, whether as mid-career hires or even as new citizens and permanent residents.

“It will have to evolve dynamically to give adequate rewards and recognition to the diversity of talent so that the public service can remain vibrant and be able to attract talent from all sectors and levels,” she says.

Having come this far, her family’s view of her career has changed. Ms Tay says: “Having journeyed with me through my career in the service, they are now proud of what I do.”